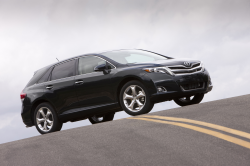 Toyota is recalling the 1st generation Venza because its driver-side airbags might not work anymore. The wires connecting crash sensors to the airbag control unit (ACU) can break. When that happens, the driver-side curtain shield and side airbags won't deploy in a crash.

A Bit More About This Recall ∞