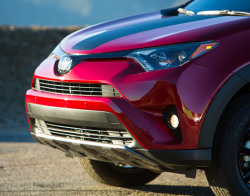 The 4th generation RAV4 is being investigated for what NHTSA is calling "non-thermal crash events." These are better described as "holy crap, my car's on fire" moments. I'm hoping that'll catch on. So far there have been 11 fire incidents stemming from an issue with electrical shorts in the B+ terminals of the SUV's 12-volt batteries.